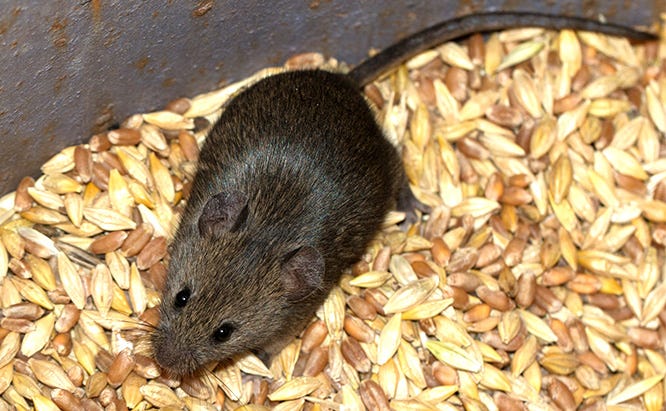 Out of all the members of the rodent kingdom, rats and mice are among the most adaptable regarding habitat and diet. That, in large part, is why they have managed to be a persistent nuisance from the dawn of humanity. The problem lies in the fact that mice and rats will eat just about anything humans eat and are happy to coexist with us in just about every environment.

If a mouse has nested in your surroundings, you may be asking, “What do mice eat once they are in my house?” Alternately, if you have suspected rodent activity outside your home, you could be wondering what attracts rats and mice to a home in the first place. The answers are all around us, just look at that sink of dirty dishes, the overflowing trashcan outside or the pile of windblown leaves in the far corner of the yard. Whether we’re willing to admit it or not, humans continue to provide shelter, protection and food to these animals.

What Foods Attract Mice and Rats

Rats and mice can do a lot of nibbling in their relatively short lives. What’s really surprising is despite all that nibbling and gnawing, a rat's stomach is approximately half the size of a human thumb. Adult female rats weigh about 225 grams, and males weigh up to 267 grams. As a result, they can eat approximately 15 to 20 grams per day. What are they filling their little rodent tummies with? A variety of edibles:

Plants — People often ask, “Do mice eat plants?” The answer is yes. Rodents feed on the flora of their surroundings. While some of the bigger plants are more likely to be tackled by their larger rodent brethren, rats and mice will consume just about anything they can get their teeth on. In terms of the natural growth that surrounds most houses, rats and mice are known to nibble on everything from grass and weeds to small twigs and bits of bark. Plant seeds are another favorite food among these animals.

Grains and seeds – One of the more natural rat and mouse foods are grains and seeds, whether they have been stored for later use or remain attached to a plant. In agricultural settings, mice and rats are attracted to grain storage bins and farm fields prior to harvest. In a more suburban setting, they may seek out tasty seeds from your flowerbed or garden. They may also raid bird seed containers, sneak into sheds where you have stored grass seed or venture into a cabinet for unprotected cooking and baking ingredients.

Fruit and berries — Out of all the foods rodents consume, their top two loves are generally fruits and berries. In the wild, rats and mice consume these foods at every opportunity. Therefore, raspberry and blackberry bushes — as well as apple and pear trees — can serve as magnets for the animals. When unconsumed fruits and berries are left to rot on their bushes or trees or left in uncovered trash cans, these rodents are drawn by the smell and sweetness. This can ultimately lead to infestations of residential properties.

Nuts — All rodents love nuts, from peanuts and walnuts to almonds and hazelnuts. In fact, just about any nut can serve as ample nourishment for rats and mice. As such, these high-protein energy sources are always a favorite.

Meat — The consumption of meat among rodents tends to vary between each species. Though they prefer seeds, grains and fruits, most mouse species are omnivorous creatures that will eat meat if the opportunity presents itself. Rats are more avid meat eaters, and they will consume all types of rotten fish, poultry and red meat. Mostly this meat is recovered wherever they can find disposed foods, such as dumpsters, trash cans or stripped off of roadkill. However, it should be clarified that rats and mice don't hunt for meat. They simply eat whatever meat they find.

Garbage scraps and trash — Regardless of the refuse humans throw away, much of it is a goldmine in the minds of rats and mice. Food of all kinds are prime targets of rodent dumpster diving, especially disposed-of bread, cheese, meat, fruits and vegetables.

Pet Food – If it’s good enough for your dog or cat, it’s good enough for the rats and mice of your neighborhood. They won’t limit themselves to cat and dog food, either. Expect mice and rats to be interested in anything you feed any other animal including grains, seed, hay, fish food and so on.

Food and animal byproducts — Rodents will even chow down on various non-edibles, such as worn clothes and leather. Simply tasting or smelling like a food is often enough for a hungry rodent to make a test-nibble on such an object. If the taste or smell is strong enough, a desperate rodent will continue with its meal, too.

Salt — One of the biggest attractions for rodents is salt, which they'll consume as much as possible from food and non-food sources.

5 Ways to Get Rid of Mice Quickly

Victor® has developed a number of options to eliminate a mouse problem quickly and with little effort on your part.

Option 1 -- Scent Repellents – Victor® Scent-Away™ Rodent Repeller Drops are filled with peppermint oil and deliver a strong minty scent that rodents cannot stand. Hang these drops in an enclosed space, such as a shed or attic, and the scent drives mice away.

Option 2 – Live Traps – The Victor® Tin Cat® Mice Trap allows you to capture multiple live mice in one trap. After a few have been captured, you can then release them in a more appropriate setting.

Option 3 – Hygienic Traps – Don’t want to touch a mouse? Capture them in the Victor® Kill & Seal™ Hygienic Mouse Trap and then just throw the entire thing away.

Option 4 – Electronic Traps – The Victor® Electronic Mouse Trap cuts your mouse problem down quickly, allowing you to kill up to three mice per setting.