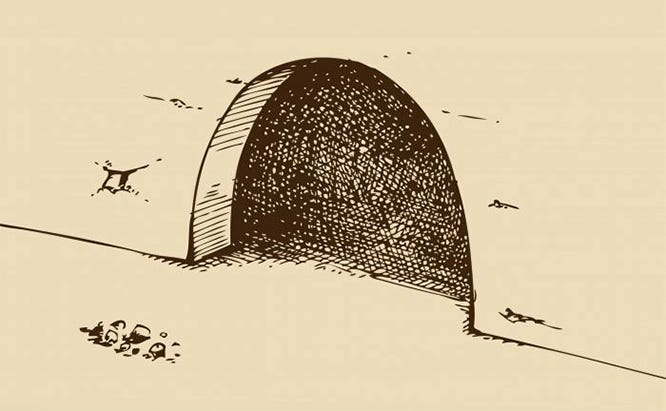 When you think of a mouse hole, a cartoonish image is likely the first thing that comes to mind. In “Tom & Jerry” cartoons, Jerry the Mouse comes and goes as he pleases through a nicely cut, rounded entrance along the baseboard of a home that Tom the Cat patrols. Except for stealing wedges of cheese, Jerry’s a wonderful house guest.

Reality isn’t so pleasant, though. Real-life mouse holes are destructive, messy and a sign of an intense infestation of pests that carry disease and destroy your property.

Mouse holes aren’t as easy to find as you would think. They definitely aren’t like the openings in the cartoons. Instead, mouse holes inside and outside a building will appear as:

Further, these mouse holes are rarely a doorway that leads directly to their nests. Instead, these holes are simply an access point to wander into and through your house. Their nests are often hidden in quiet, closed-off areas that homeowners don’t regularly access. 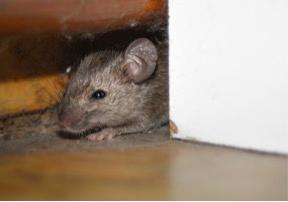 Signs of a Mouse Invasion

If you’re concerned that mice may be in your home, look for mouse holes inside and outside the home. These access points don’t even have to be at mouse level since mice are excellent climbers.

Aside from the hole itself, pay attention to the signs around the hole and its immediate area. If you spot any of these, you have amouse problem:

Mice and other pests may also be finding their way into and around your house through openings that already exist in your home. These “inadvertent” mouse holes create highways for pests traveling through your home and include entry and access spaces for electrical wiring, plumbing, HVAC systems, conduits, vents and phone and cable lines.

The best example inside your home can be found underneath your kitchen or bathroom sink. There you’ll likely find openings for the drain pipe and the hot and cold water lines. Since most plumbing is installed before the cabinet, there’s often a small space opened in the wood to allow the plumbing to snake through. The hole is usually bigger than the plumbing, and that space allows mice and other pests to use your pipes to travel elsewhere in the house.

Check these access areas regularly for signs of pests discussed above. 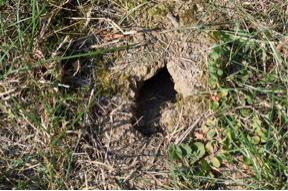 If you think that mouse holes in buildings are difficult to find, you’ll be absolutely stumped by mice that live outdoors. In the wild, mice make their homes in just about any place they can fit – under rocks, in tree cavities and in burrows abandoned by other animals.

Those burrows are often expertly camouflaged to keep predators out and feature multiple rooms to allow them to store food and nest comfortably. Even an exposed mouse hole is tough to properly identify because it’s simply a hole that could have been made by dislodging a rock or jamming a stick in the dirt.

Outdoor mice, of course, really appreciate humans because people provide so many shelter opportunities including under decks, in wood piles, in foundation crevices and inside anything that’s left undisturbed in your yard.

Should You Block Mouse Holes?

The short answer is “No.” Blocking off a mouse’s entrance and exit point inside a house can lead to more damage to your home as they try to chew their way to freedom. Sealing them off completely limits your ability to trap them. Likewise, trapping a mouse inside the infrastructure of your home can mean you’ll soon have a dead mouse (or mice) inside the wall space of your home. Despite their small size, their decomposing bodies can create a terrible smell, generate harmful bacteria and attract even more pests.

Instead, you’ll want to trap the mouse living in your home and remove it before it can cause any more problems. Only after you’re sure your mouse problem has been eradicated do you want to reseal any interior access points with caulk and steel wool.

That being said, exterior mouse holes should be sealed with steel wool and caulk immediately upon discovering them. There’s no sense in letting more mice into your home while you’re busy trapping their cousins!