Summer is the season for beach days, backyard barbecues – and, uh, rat infestations (depending on where you live).

While summertime may be opportune to bust out the sunblock or iced tea, it’s also a common time of year to spot a pesky rodent or insect you might otherwise want to avoid outdoors. That doesn’t mean you won’t catch them scurrying through the night in the winter, but like many of us, they enjoy being outside during warm summer months, too.

We studied the history of non-emergency 311 calls to report rodent sightings between 2012 and 2017 in three of America’s busiest (and most rat-friendly) cities: Boston, New York City, and Chicago. Curious which neighborhoods in these star-studded cities are most likely to include a chance encounter with a four-legged rodent? Continue reading to find out. 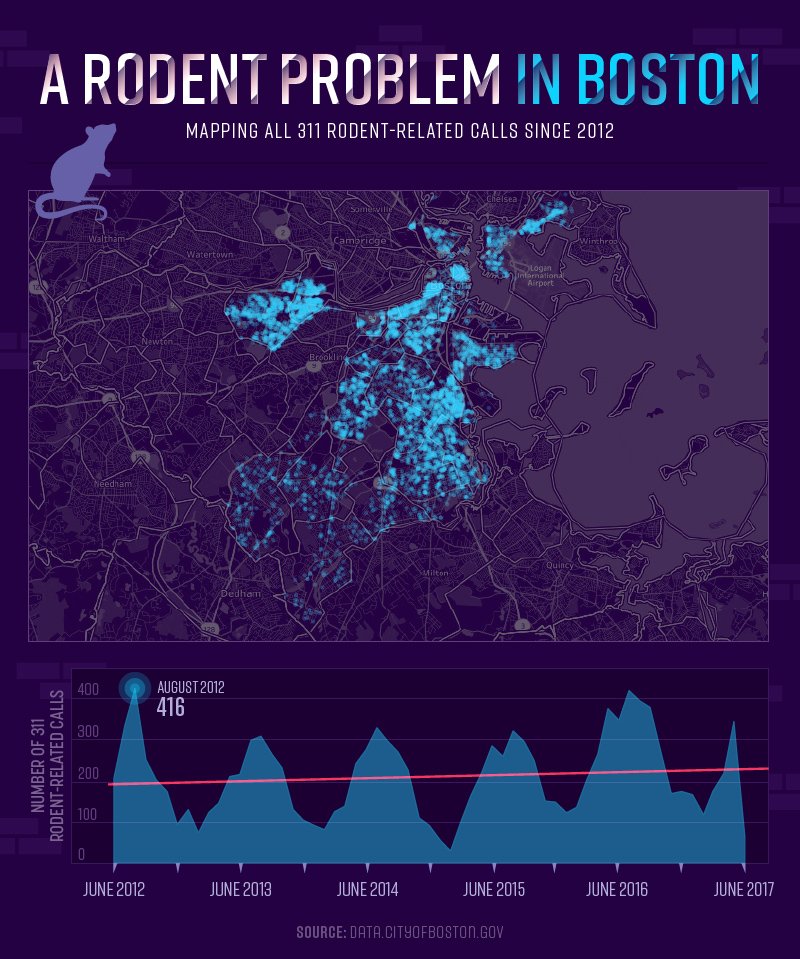 Boston has a lot of great things going for it. The Freedom Trail. The Paul Revere House. Fenway Park. And occasionally something not so impressive, rats. Boston doesn’t just have a few pests; Animal Planet ranked it as one of the most rat-infested cities in the entire world. In fact, Boston’s rat problem got so bad at one point that the city decided to try using dry ice as a means of exterminating these pesky rodents. In late 2016, the U.S. Environmental Protection Agency stepped in to put an end to the dry ice pesticide experiment – which essentially suffocated the rodents – leaving Boston with the traditional methods of traps and poison to try and deal with the issue. However, in June 2017, the EPA registered a dry ice product for use in rat burrows, aptly named Rat Ice.

Neighborhoods to Keep an Eye On 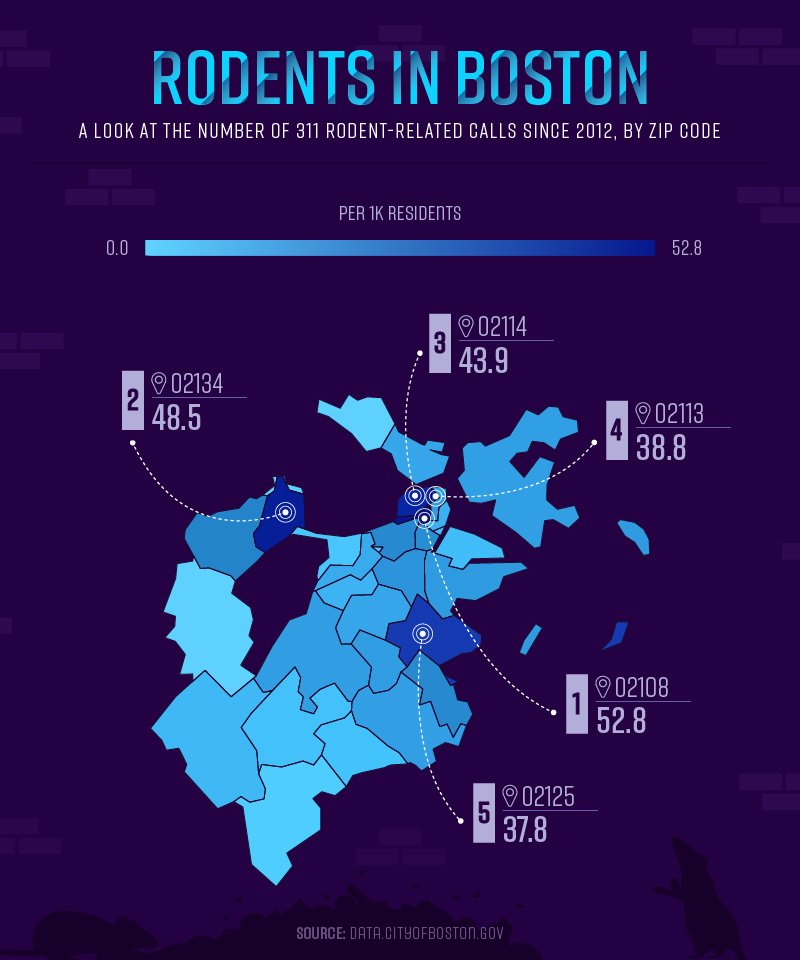 Certain areas in Boston had a much higher rate of rodent-related calls over the last five years than others.

One of the oldest neighborhoods in Boston, Beacon Hill (02108), a historic neighborhood covering less than one square mile along the Charles River near the West End, had the most rodent sightings with nearly 56 calls for every 1,000 residents between 2012 and 2017. While extreme – one condo in the area was found to have at least 20 dead rats in 2015, with many more expected to be alive still.

Rodents in the Concrete Jungle 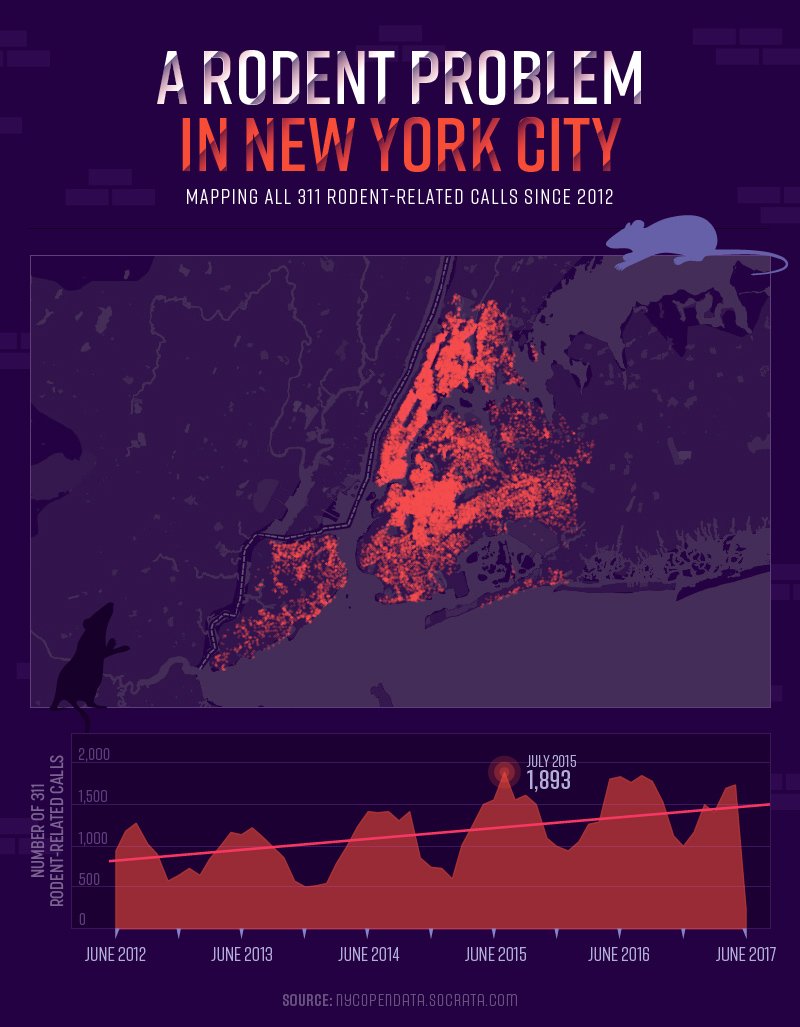 There are a couple of things that might be iconic to you if you’ve ever visited New York City – yellow taxi cabs, the Empire State Building, and maybe even one of these guys (rats). Rats in NYC even have their own meme, the Pizza Rat, combining two of the things New York CIty might be best known for.

New York City doesn’t just have a rat problem; it has a rat epidemic of enormous proportions. Rodents have the potential to carry some nasty germs that can be hazardous to humans. Leptospirosis, a bacterial disease (not unlike the bubonic plague) linked to rats, has killed at least one New Yorker in 2017 and left two others in critical condition.

Leptospira bacteria live in warm, summer months, and our study of New York City’s rodent call sightings between 2012 and 2017 revealed May, June, and July as the most common months for these calls – peaking in July 2015 for a total of 1,893 calls. 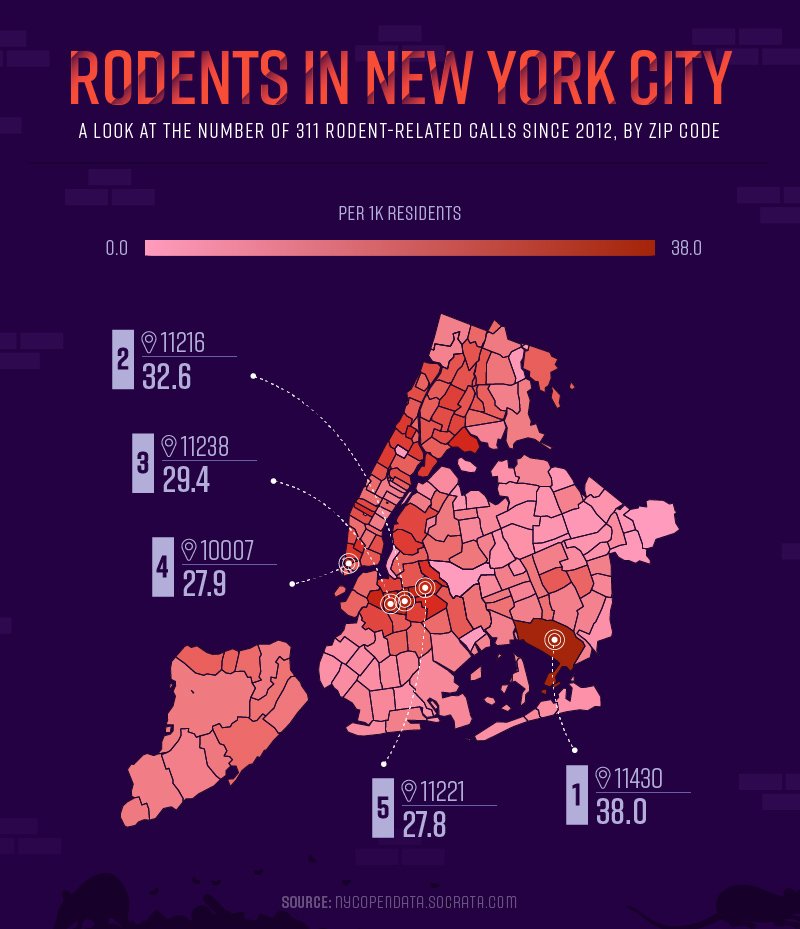 New York City is pretty big in and of itself – regarding both its physical size and the number of people who live there. With more than 300 square miles of the area covered, and more than 18.5 million people living in NYC's five distinct boroughs, New York City is the most populous city in the country.

Certain neighborhoods in NYC also happen to have the most 311 calls for rodents. A Queens ZIP code (11430) came in on top for more than 38 calls per 1,000 residents between 2012 and 2017 – the highest in the city. It doesn’t even have to be dark out for the rats in Queens to make an appearance, and officials even attempted to use dry ice (similar to the efforts made in Boston) to try and suffocate the rats in large numbers. 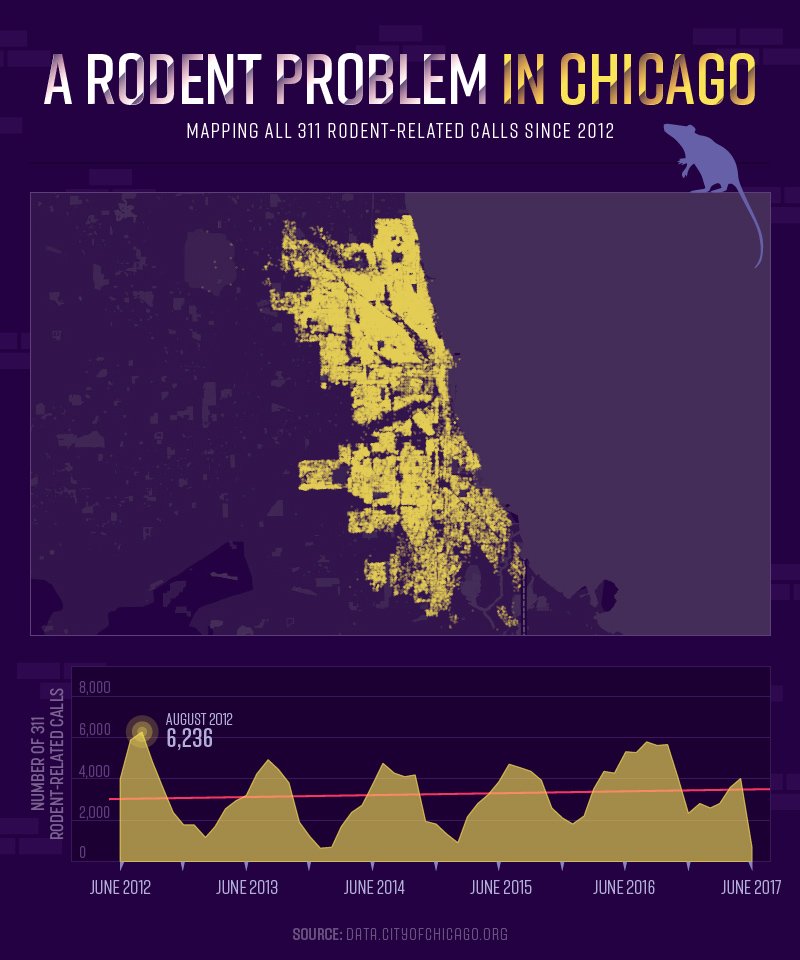 Like other great American cities, Chicago also struggles with a rat infestation. One extermination service even labeled Chicago as the “rattiest city” in the country in 2016. Like the other metropolitan areas studied, Chicago saw a spike in its rat population (and complaints) after a particularly mild winter in 2016 and also attempted to use dry ice to help control the situation.

The warm summer months tend to be the hardest for Chicago’s rodent concerns, with 311 calls peaking in August most years. August 2012 had the most with over 6,200 calls, while August 2016 had nearly 5,800 calls.

Four-Legged Foes in the Windy City 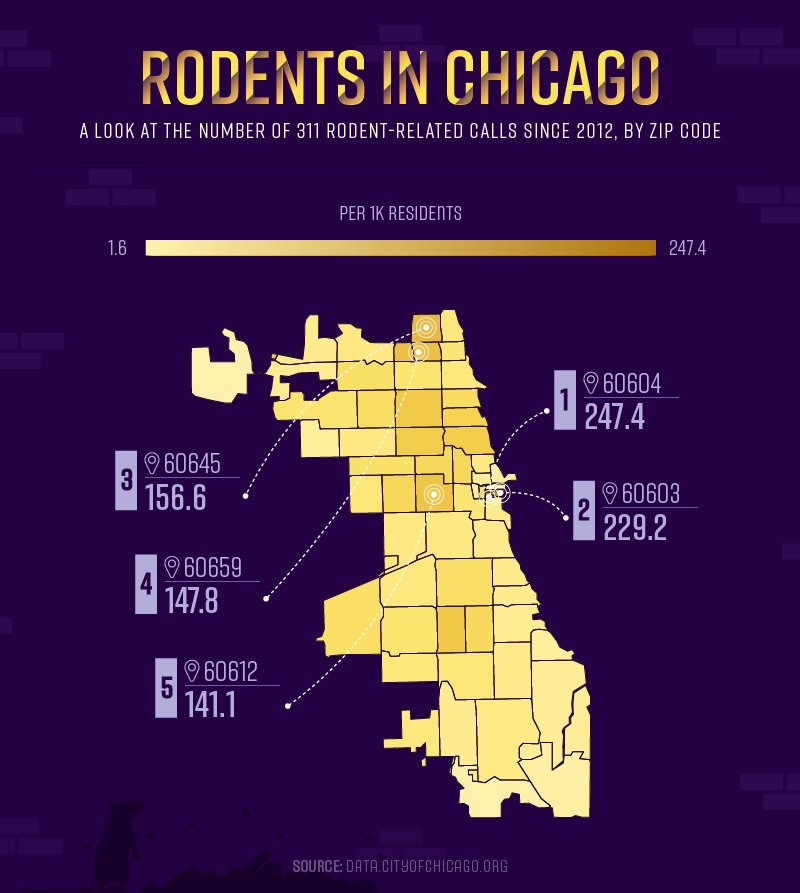 The Loop may not be Chicago’s biggest neighborhood, but this downtown business district is home to Chicago’s City Hall, quintessential Chicago architecture, and even the famous Cloud Gate art installation. The 60604 area of the Loop also happens to have more rat sighting calls than any other neighborhood in Chicago – more than 247 per 1,000 residents. Other Loop ZIP codes like 60603 also reported over 100 calls per 1,000 residents between 2012 and 2017.

Putting an End to the Rodent Problem

Rodent epidemics have become so severe in some cities that Boston, New York City, and Chicago have all attempted to use extreme measures to try and quell the issue. Even though the EPA initially found these efforts ineffective, there are many ways to control rodent infestations, particularly in the warm summer months. A $32 million plan was even announced in July 2017 to reduce the presence of rats in New York City by as much as 70 percent.

At Victor Pest, we control rats (and other rodents like mice, moles, and gophers) with the best in rodent control at the most competitive pricing. Our services include everything from the traditional snap and glue traps to high-tech electronic traps and ultrasonic repellents. We’ve been innovating the best in rodent traps for more than 100 years, and we believe in the perfect product for the perfect situation. Visit us online at VictorPest.com to learn more.

We pulled non-emergency 311 phone calls and analyzed rat- and rodent-related calls for Boston, Chicago, and New York City to pinpoint where exactly in the city rats and other rodents are being reported the most.

Don't let the rodents get you down. Feel free to share the results of our study with your readers for any noncommercial purposes. We only ask that you ensure a link back to this page, so our contributors earn credit for their work.