Have you ever found a field mouse in your house, seen a cockroach scuttle across the kitchen counter, or heard the telltale scratching of birds in the ventilation?

If so, what did you do? Which animals did you try to catch, nudge back into the wild, or exterminate? Which critters were worth keeping alive and which were just … critters?

These were the questions we asked over 1,000 Americans about animal intruders. Curious to see what people would do? Keep reading to find out. 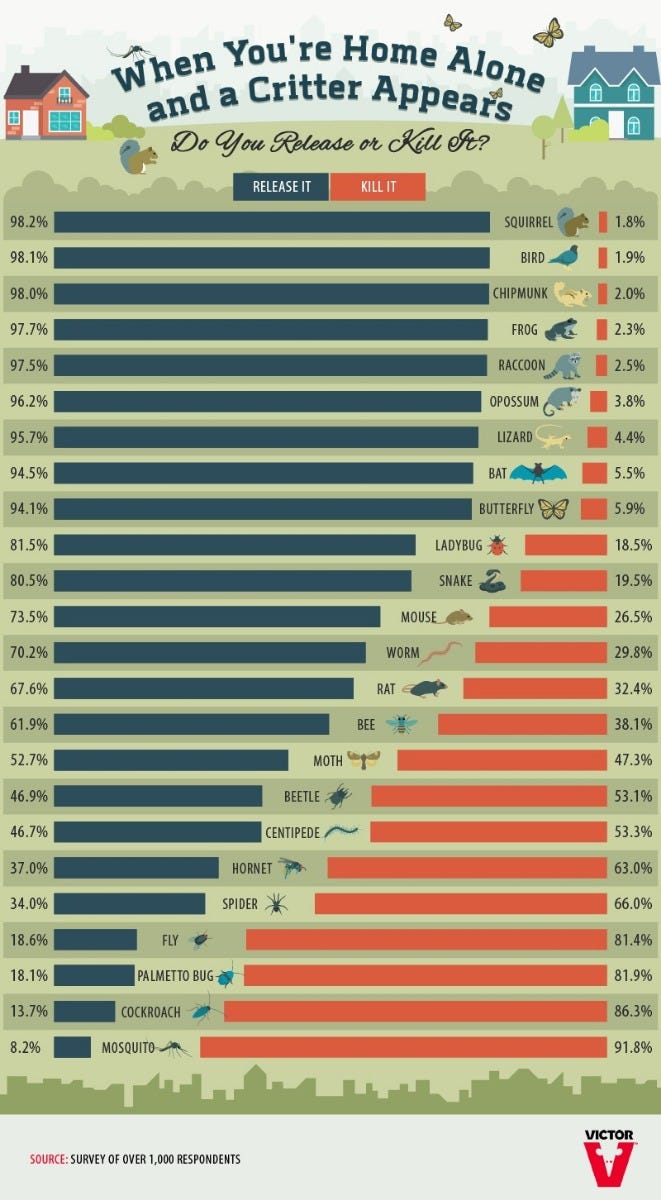 It may come as no surprise to learn squirrels, birds, and chipmunks were on the “release unharmed” list for over 98 percent of people – perhaps because they’re animals we consider cute and even sometimes keep as pets. And while squirrels do bite humans from time to time, we usually don’t consider any of these top three animals as dangerous as others.

On the other side of the spectrum, the animals most likely to earn a death sentence for finding their way into a human dwelling were the much-loathed mosquito, cockroach, and palmetto bug.

Interestingly, though, snakes were more likely to make it out alive than mice, and raccoons – known for their cheerful willingness to bite people – were higher up on the release list than butterflies and ladybugs.

Would You Kill That in Front of Your Kids?

When we asked survey respondents about killing or releasing animals in front of a date or a child under the age of 14, we found having an audience changed how people reacted to intruding critters.

It turns out, we’re all a little less likely to kill a bat if our significant other is in the room and a bit more likely to kill it if children are present. Perhaps we don’t want to be seen as cruel in scenario one, and we’re concerned for the safety of a child in scenario two.

What Are You Afraid of?

What drives our decision to kill or release? Is it fear, compassion, or something else altogether? To answer the first part of this question, we asked survey respondents which animal invaders scared them most. Perhaps unsurprisingly, snakes won the day, followed by opossums (a creature some say has an unfair reputation), hornets, and bats (another misunderstood creature unlikely to harm humans).

Revenge of the Less Outdoorsy 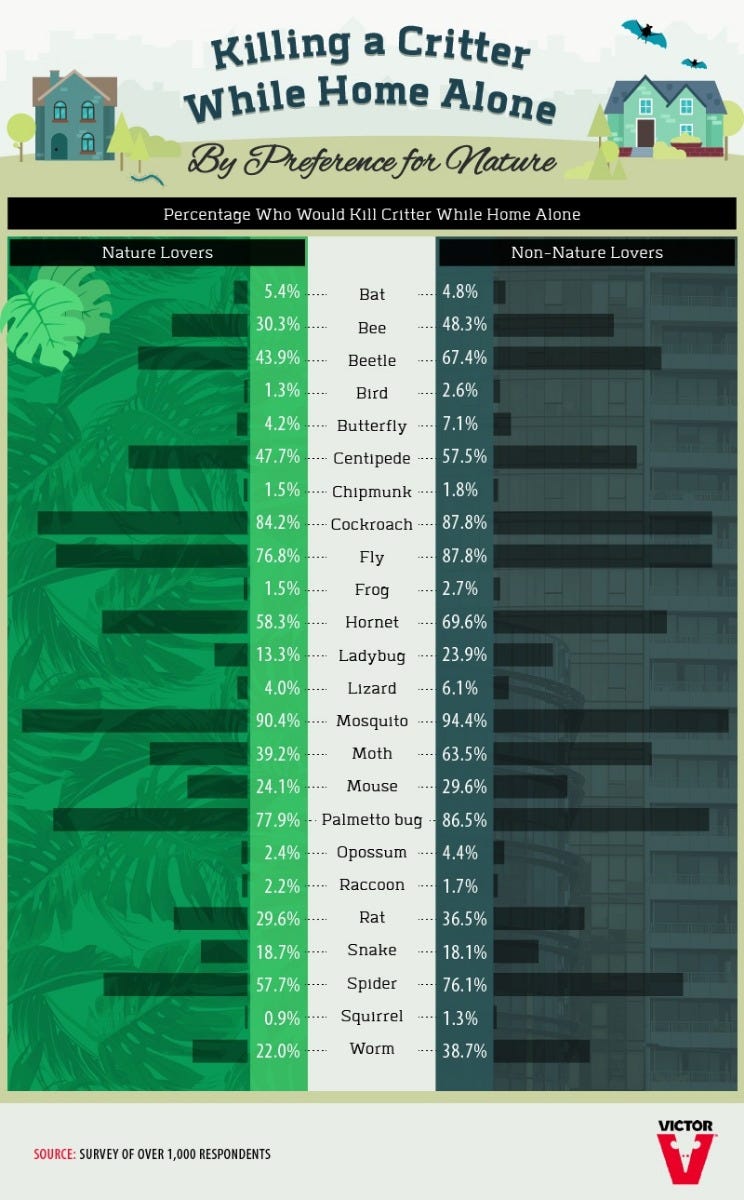 Cockroaches are less likely to make it out alive than butterflies across the board, but are people more likely to shoo a bird, bat, or beetle gently out the door than others?

We asked survey respondents if they loved nature or not and then filtered our findings using that data. Those who ranked themselves as nature lovers were less likely to kill almost every type of critter. The three exceptions? Nature lovers were more likely to extinguish snakes, raccoons, and bats. Still, nearly a third of those who love nature would kill a bee they found in their home, compared to almost half of those without nature in their genes.

While bees may seem scary in your kitchen or living room, you might want to reconsider swatting them down. Species of bee, like the honeybee, are currently in danger of colony collapse disorder, and their extinction could have a tremendous impact on the global economy.

Creature Fear, by Gender and Generation 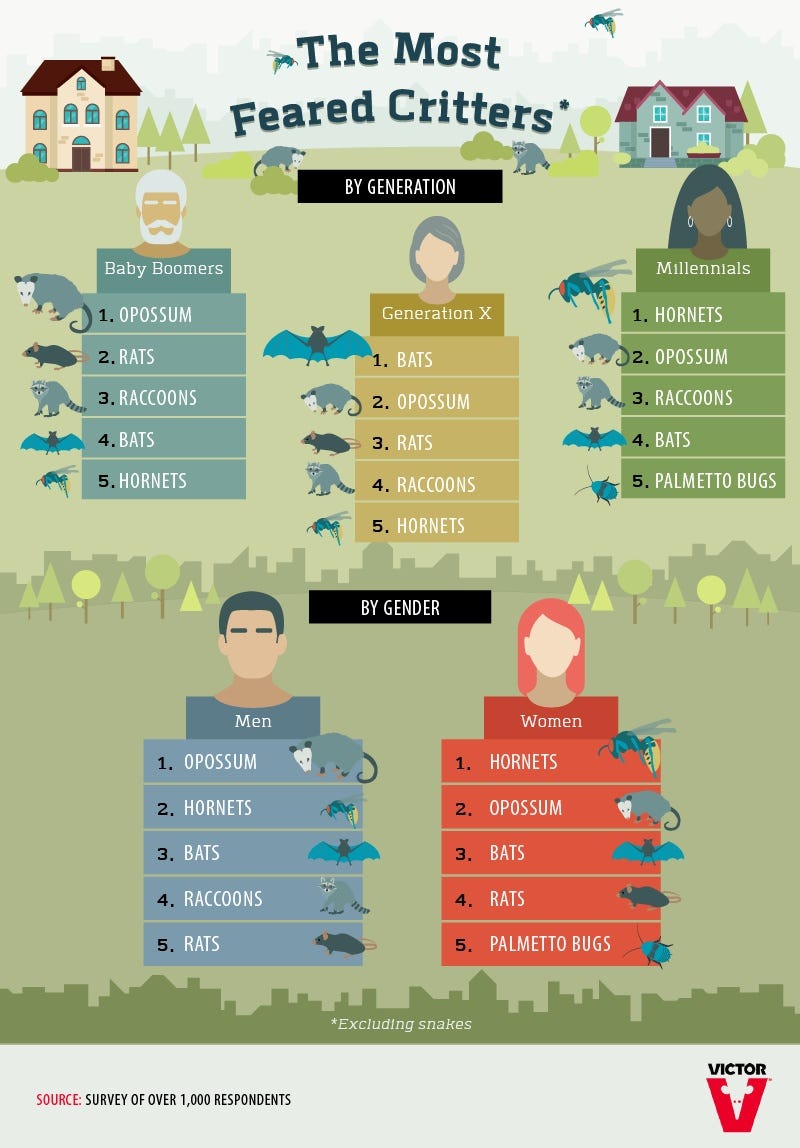 Which animals strike the most fear in your heart? Is it a hornet, a toothy spitting opossum, or a vampiric-like bat?

If you’re a baby boomer, chances are you answered opossum. Opossum's may be known for their beady eyes and rat like tails, but they do more than eat your garbage in the night. Despite their small brain sizes, Opossum’s are uniquely skilled at foraging for food, and better than both rats and cats at solving mazes. They can also be good for your health considering they have an affinity for eating ticks, which have been known to spread Lyme disease to humans and others animals. If you’re a Gen Xer, bats probably give you the heebie-jeebies. While bats are more common in the U.S., they provide benefits to people everywhere by consuming insect pests and aiding in the pollination process. However, if you’re a millennial, hornets may be your archenemy.

Men were also more likely to fear opossum, and women ranked hornets in the No. 1 fear slot.

Who’s Most Likely to Kill a Critter? 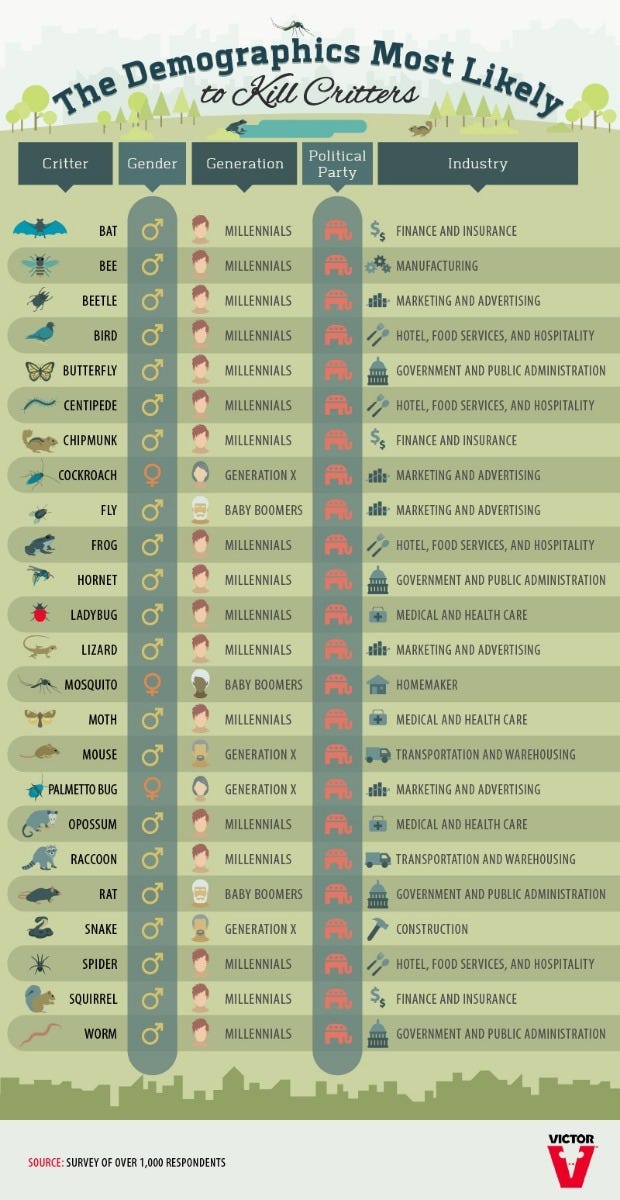 We may all be scared witless by snakes and creeped out by cockroaches, but which of us are most likely to kill each critter instead of ushering it – gently or not so gently – from the house?

Almost across the board, men were more likely than women to kill the offending creature. No need to call in reinforcements, though, as women took the lead on insects like cockroaches, palmetto bugs, and mosquitos. While millennials were the most likely to take a critter’s life, baby boomers were the most likely to find peace with these critter companions – except flies, mosquitos, and rats. Politically speaking, Republicans were more likely than any other political group to take decisive action.

Men vs. Women: Who’s Most Likely to Kill in Front of a Significant Other?

It can be hard to know what to do when a creepy-crawly waltzes into the room while your significant other is around. While women were less likely to kill whatever critter plagued their home, they were more inclined to stand up to hornets and palmetto bugs when their love interest was present. However, they defaulted to their companion with spiders and mosquitos.

Men, on the other hand, were more likely to kill a critter in some cases, including bees, snakes, and frogs. Perhaps not wanting to upset their partner, they were much less likely to kill a rat, ladybug, or a mouse when their significant other was in the room. 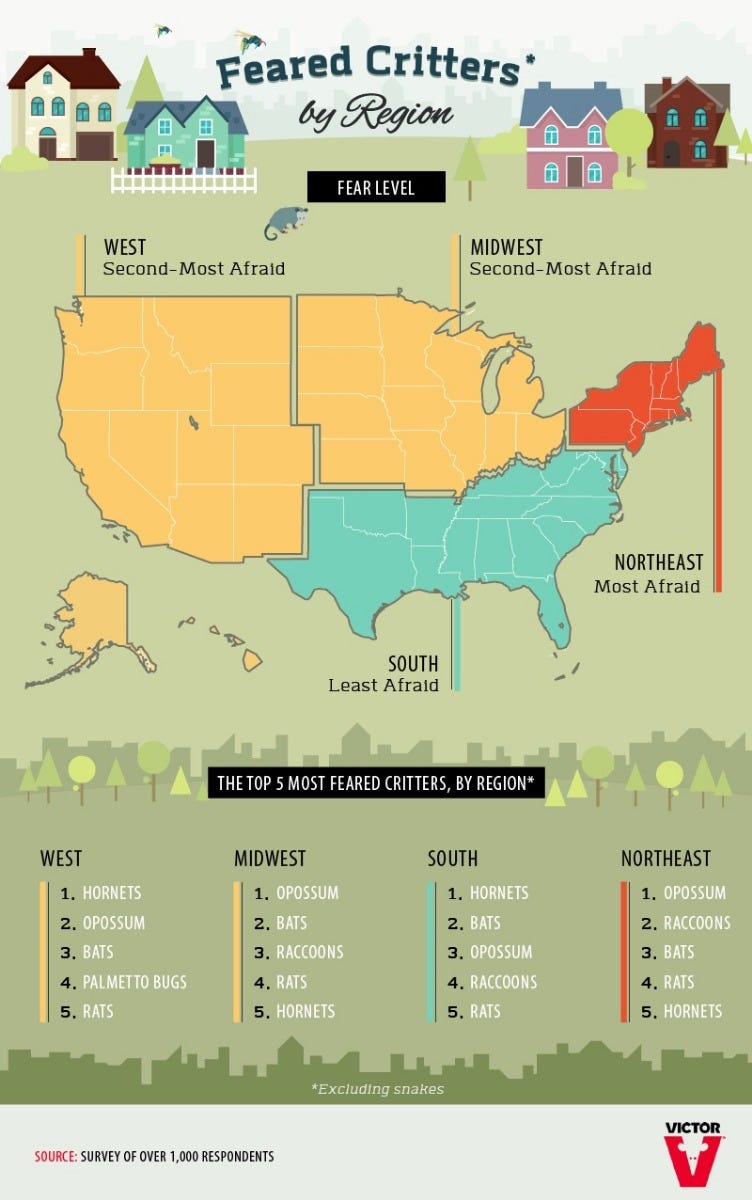 Respondents’ creepy-crawly fears also varied by region. In the West, hornets managed to strike fear into more hearts. In the Midwest and Northeast, though, it was the opossum participants feared most.

Overall, the Northeast was the most afraid of critters. However, like most of the U.S., people in this region were also concerned with bats, rats, and hornets. And while the South was the least afraid of these invasive pests, respondents still listed hornets as their most concerning species of critters, followed by bats and opossums.

Dealing With Pests in the Home

Whether it’s opossums, rats, or eight-legged creepers we’re dealing with, how we react seems to not only depend on the animal, but on our background, beliefs, and location. Leaning Republican? You’re more likely to kill an animal intruder. Feel connected to nature? You’re probably less likely even to hurt a bee.

Whatever your reaction to household pests, we can all agree they don’t belong in the house, which is why VictorPest.com exists. With over 100 years of pest management under our belt, VictorPest offers a wide selection of quality rodent control products at competitive prices. From ultrasonic repellents to lawn and garden solutions – VictorPest has everything you need to keep your family safe from creepy-crawly dangers. Visit us online today to learn more.

We surveyed 1,011 people about the critters they would kill or have killed in different scenarios, and which they fear the most.

Have no fear – it’s easy to share this content with your readers for noncommercial purposes. All you need to do is link back to this page. Our critters (or authors of this page) don’t bite, we promise.