Largest Rodents in the World & Sizes of Common Rodents

Despite their small size and occasionally cute appearance, rodents are among the most dreaded creatures in the world. In a sense, this attitude is kind of silly — the average rodent is no match for an average human.

Nonetheless, there are some rodents that are actually scary. Some carry viruses and others are quite big. A few select species are big enough and aggressive enough to scare away cats. In fact, some of these creatures resemble the ghastly Rodents of Unusual Size (ROUS) from the classic film The Princess Bride — only these ROUSes are real.

According to some scientists, rats could potentially grow larger if bigger animals within the rodent's habitat were to become extinct. An often-cited example of this very phenomenon is the growing spate on rat islands, where rats arrive as stowaways on ships only to breed, spread and ultimately emerge at the top of the local food chain.

One theory holds that rats could one day grow to be as large as the world's biggest rodent, the capybara of South America, which weighs nearly as much as most human males. Before the capybara, the world's largest rodent was the now-extinct Josephoartegasia monesi, which lived during the Pliocene and early Pleistocene epochs and weighed in around one ton. The theory further contends that rodents can get larger as eco-spaces become barren and allow more room for rodents to mutate. A comparison can be drawn to prehistoric mammals, which were rodent-sized during the Cretaceous Period but ultimately grew into horses, mammoths and rhinoceri once dinosaurs were out of the way.

The largest rodent in North America is the beaver, which boasts a body length that ranges from 29 to 35 inches, making it the second-largest rodent in the world behind the capybara. The beaver is a semi-aquatic creature with claws, nictitating eyes and a tail that averages a foot in length. Older beavers can weigh as much as 110 pounds.

The following list of rodents includes some of the largest rodents currently known to science. 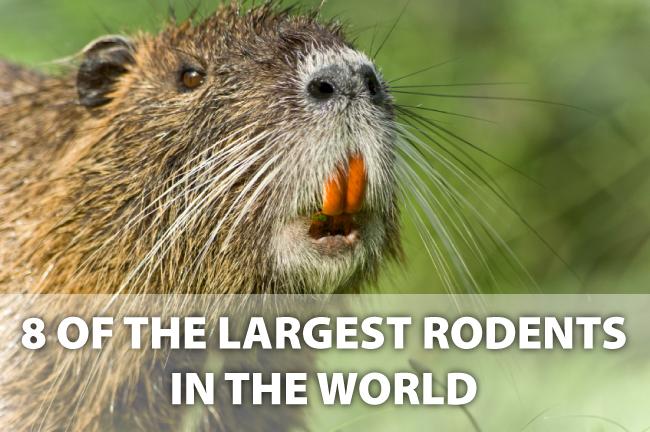 Alternatively known as the coypu, the nutria is an herbivorous, burrow-dwelling semi-aquatic rodent native to South America. Resembling a giant rat, the typical nutria grows anywhere from 28 to 42 inches in length. Adults weigh as much as 37 pounds. During the 1800s, the creature was driven from much of its natural habitat, but nutria farming for the purpose of fur was eventually started in Argentina. By the early 20th century, the practice of nutria fur farming had spread to North America and Eurasia, though the fur itself never became popular among traders.

Since the 1940s, the coypu has been a nuisance in the non-native areas that it infests, including rural England and the states of Louisiana and Maryland, where the creature escaped from local fur farms and multiplied. By the late 1950s, anti-nutria bounty programs were initiated in Louisiana amid state legislation to eradicate the rodent. More recently, nutria-based products have been sold in the form of dog food. 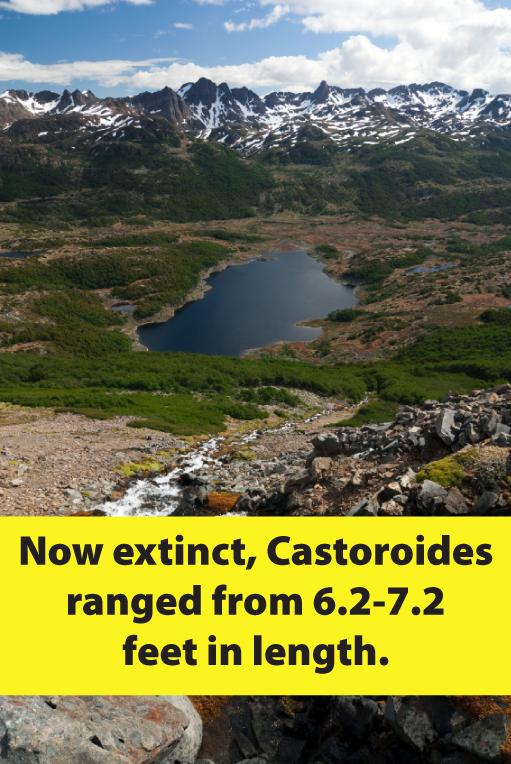 Alternately known as the giant beaver, the castoroides is an extinct North American rodent that existed during the Pleistocene. Weighing as much as 275 pounds, the creature's body ranged from 6.2 feet to 7.2 feet in length, though it's not known how much additional length the tail might have added to the body. Castoroides is the largest beaver species to have ever roamed the Earth, though it differed from the modern beaver in several ways: The extinct creature had larger hind feet, shorter hind legs, broader teeth and a smaller brain.

The first castoroides fossils were found in Ohio during the 1830s. Since that time, discoveries of castoroides’ remains have spanned from Alaska to Florida, with especially large concentrations in Indiana, Illinois and around the Great Lakes.

In 2014, a mega-rodent that measured more than 15 inches was found inside the Bengtsson-Korsås family kitchen in Solna, Sweden. Gnawing through wood and concrete to enter the residence, the rat was eventually stopped with the use of an industrial-sized trap. The rat was so big that it survived the actual snap, but it ultimately suffocated to death as it headed back to its tunnel with the trap in tow. The family first realized their rodent problem existed when their cat, Enok, became uncharacteristically averse to the kitchen area. It turned out that the feline had actually been outsized by the rat.

In addition to its enlarged size, the Viking rat has become poison-immune. Bromadiolone no longer works on the creature. According to a 2009 University of Huddersfield study, genetic mutation and poison immunity have developed hand-in-hand, which begs the question: Will new poisons need to be developed with each rat mutation?

Located in the South Atlantic, Gough Island has been overrun by an estimated two million mice, which have claimed this uninhabited volcanic island as their exclusive turf. The scariest thing is that these mice are 50 percent larger than their counterparts in the human-populated world. The growth of this creature has been spurred by its consumption of the Atlantic petrel chick, which had dominated the island until the mice took over during the late ’90s. Of the 1.6 million petrel chicks born annually on the island, 1.2 million are consumed by the mice. 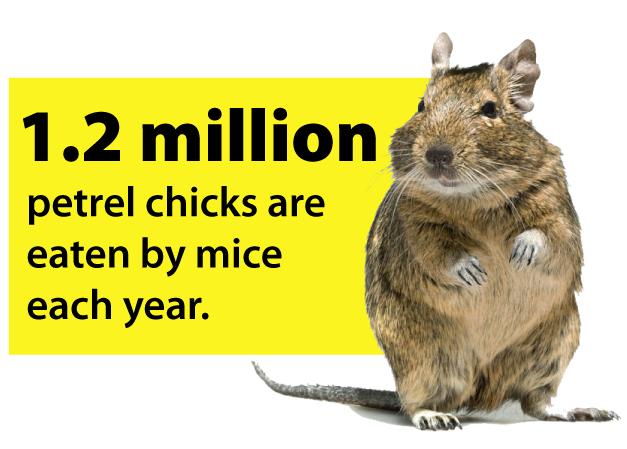 The petrel population has also been devastated by a similar black rat problem on Tristan da Cunha, where — like Gough Island — these rodents have no natural predators. Another group of islands plagued by introduced rodents are the Farallon Islands, located 28 miles from the Golden Gate Bridge. The problem in this Bay Area archipelago has gotten so bad that the ground, at least according to one wildlife official, looks as though it's moving. The Farallon mice were accidentally introduced by fur traders, and rapid-fire breeding has resulted in the world's largest density of non-native rodents.

Arguments over the best eradication method for these islands are ongoing because just one surviving pregnant female could start the cycle all over again. However, there is hope. In 2009, the complete eradication of an invasive rat population was achieved on Alaska's Hawadax Island, which had been plagued by rodents for nearly 230 years.

Fossils of this prehistoric species were first discovered in 1981 during an excavation trip in Montevideo, Uruguay, where scientists came across a 21-inch skull that surpassed the size of a modern cow. As the largest rodent of all time, Josephoartigasia ruled South America's woodlands during the Pliocene epoch with its eight-foot-long frame and more than 2,000 pounds of body mass. The creature bore unique incisors that indicate an aquatic, herbivorous diet — though that doesn't mean the Josephoartigasia didn't have to kill to survive. In addition to serving as a weapon against predators, scientists speculate that the creature's teeth could also have been used during battles over breeding rights.

Living some four million years ago, the species shared the Earth with monstrous birds, carnivorous marsupials and big, hungry cats. Of today's creatures, the Josephoartigasia most closely resembles a larger capybara.

One of the more recent discoveries in the rodent world, the woolly rat was first encountered by scientists in 2009, when a research team stumbled upon the critter in the Bosavi crater in Papua New Guinea. The team was given pointers by members of the nearby Kasua tribe, who've rarely gone into the half-mile-high crater themselves.

Believed to have had no prior contact with humans, the Bosavi woolly measures 32 inches in length, which makes it the largest living rat in the world. Due to its status as a recent scientific find, the silvery creature has yet to be given a formal name. The same crater has also been the site of 40 other heretofore unknown species, including 16 amphibians, three fish, a gecko, a marsupial and several arachnids — none of which are thought to exist in other parts of the world.

While the Bosavi woolly is the largest existing rat currently known to science, it's not the largest rat to have ever existed. Excavators in East Timor, Indonesia, an apparent hotbed for the evolution of rodents, have found the remains of a 1,000-year-old, 13-pound rat species that was three times bigger than the woolly. The same expedition unearthed an additional 12 species, 10 of which had never been seen by science. Considering the dense, hard-to-navigate forests of East Indonesia, the remains of other extinct rodents are possibly waiting to be discovered.

Living more than 100,000 years ago on the isle of Anguilla in the Caribbean, this bear-like rat was double the size of grown humans and at least 1,000 times bigger than today's rats. Known officially as the Ambyrhiza, the extinct creature is informally referred to as the giant hutia.

The slow-moving hutia appears to have been a species free of predators. Fossil records show that no competing mammals existed on Anguilla during the creature's existence, when the island was 12 times larger — comprising modern-day St. Barts, St. Martin and Anguilla — thanks to lower sea levels caused by the Ice Age. The end of that period brought about higher sea levels, to which the hutia couldn't adapt, resulting in the animal's extinction.

Smaller descendants of the ancient hutia roam today on islands of the Caribbean, but most weigh little more than five pounds. These modern creatures are often seen in the Guantanamo Bay area of Cuba, where they're referred to as banana rats due to the shape of their droppings. 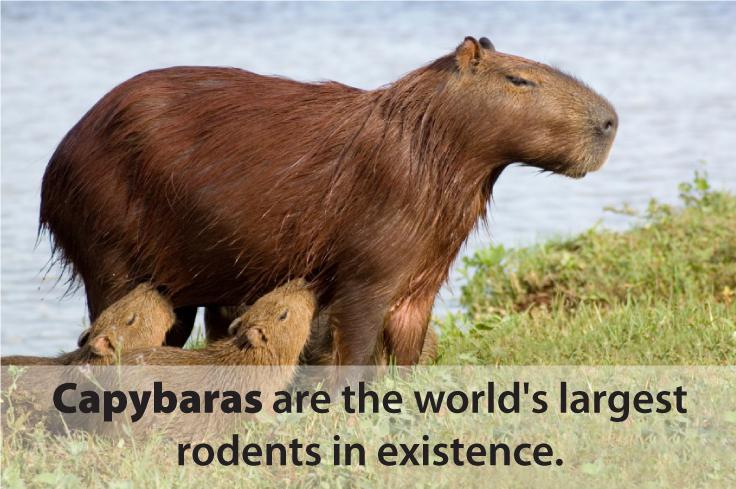 The world's largest rodent in existence is the capybara, which is seen throughout Brazil and neighboring countries. Dwelling in semi-aquatic areas, the barrel-shaped South American rodent ranges from 3.5 to 4.4 feet in length, stands up to 24 inches tall and weighs anywhere from 77 to 146 pounds. In Venezuela, capybara meat is served as an entrée, which is especially popular on Easter. The same region, however, has fossils of prehistoric rodents that were much larger, including the 14-foot-long Phoberomys pattersoni, which scientists estimate weighed anywhere from 550 to 1,500 pounds.

How Big Do Different Types of Rodents Get?

Some of the world's biggest living rodents can dwarf cats and smaller dogs, but what about the typical rodents that haunt buildings, parks, gardens, apartments and houses throughout the world? The following is a quick rundown of the average maximum size of mice, rats and other little critters that could possibly turn up in your house or yard.

Protect Your Property from Rodents Large and Small

While you're not likely to encounter the world's largest rat or mouse in any English-speaking country, little critters could still get onto your property. Whether it's rats or mice invading your home, or moles and gophers burrowing under your lawn, rodents can carry viruses and do plenty of damage, from gnawed wires and chewed wood to uprooted soil and ruined shrubbery.

The moment you see signs of such activity on your property, put an end to it with Victor® traps and repellents. The Victor® catalog contains a wide array of rat control, mouse control and mole/gopher control products for handling everything from a single critter to a full infestation.

Protect Your Home Inside and Out With These Trusted Brands