Anyone who has ever said, "You're making a mountain out of a mole hill" does not understand the frustration, angst and despair moles inflict on homeowners. These underground critters can turn a beautifully manicured lawn into something resembling a war zone, seemingly overnight.

Contrary to popular belief, moles are not rodents. They are insectivores. These small mammals spend their entire lives below the surface of the ground, tearing up suburban lawns and gardens in an endless quest for food.

Moles are small, destructive burrowing creatures about five to eight inches long. Weighing in around three to five ounces, moles have thick bodies with short, velvety fur that conceals their extremely small ears and eyes. On average, moles live for two to three years.

Moles are often noted for their enlarged, webbed feet, which they use as paddles to "swim" through soil. As they move deftly and swiftly underground, they leave behind unsightly trails that can disfigure and uproot flowers, plants, crops and shrubs. These trails can also be quite hazardous to homeowners. Just ask anyone who has had the misfortune to trip over a mole run and sprain an ankle.

Moles are active year round, 24/7, though they tend to be most active in the spring and fall. Generally, moles will create surface tunnels or ridges in the top 6 to 12 inches of the ground as this contains the largest food supply. During the winter, moles burrow deeper into the soil as their food source burrows deeper, in search of food. 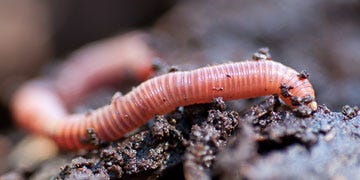 Moles are enormous consumers of food. They typically eat between 70% to 100% percent of their body weight in a single day and can dig up to 150 feet of tunnels per day in search of nourishment. Earthworms are their preferred food source making up 85% of their diet, but they'll also happily gobble up grubs, snails, beetles and other small underground invertebrates.

Earthworms, grubs, beetles and other insects 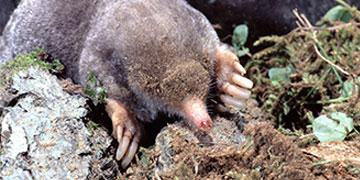 Though all moles live underground and rarely come to the surface, their habitat preferences vary between species. Some moles, including the Star-Nosed Mole, prefer moist areas like wet meadows, bogs and marshes. Others, such as the Eastern Mole like drier soil found in woodland areas, meadows and fields. Regardless of preference, you should know that all moles have two things in common. All species look for soil that is rich in food and easy to tunnel through and they all adapt effortlessly to their surroundings...including suburban gardens and lawns.

Moles can be active on up to 1 acre of land

Moles are not social critters - which should come as no surprise due to the fact they live in the dark underground - except during mating season which occurs in early spring. After a gestation period between 4 to 6 weeks, a litter is born, typically ranging in number from two to seven baby moles. The babies grow quickly and soon leave home to establish their own tunnel systems, thus perpetuating a vicious cycle.